For millennials, the era of the 2000s was the best. It was an exciting time when teenagers started picking out their clothes and experimented with various styles – from tying a bandana over the head to wearing long beaded strings reaching their waist – as the 2000s represented their independence. With personal choices being made at a young age, there comes a hoard of embarrassing moments too. You might not like how you dressed back in the 2000s, but at that time, you were a hit!

Most people who were going through their teenage or early 20s during the said time are now adults. They can still fondly remember how picking out their trendy clothes by themselves, buying choker necklaces, or weaving friendship bands boosted their self-esteem. If you do not fall into this category, be prepared to enlighten yourself about the top fads of the 2000s as you read through this blog. Also, constantly reapplying lip gloss so that the shimmer never went off was a real thing. You could randomly check any girl’s back pocket and find a shimmery lip gloss there. How could you not want to accessorize with a trucker hat when you saw Paris Hilton and Nicole Richie wearing a Von Dutch hat in an episode of The Simple Life? It was not as if you had a choice. A trucker hat was the most popular fad in the 2000s. This is probably the most memorable fad of the 2000s. It is sometimes cherished by many, while some loathe the idea and voice their concern for this fad resurfacing today. Every young girl in school and college could be seen wearing one of these and constantly tugging up the low-rise jeans all day.

This trend might have never faded if the low-rise jeans had not become super low and showed upper buttocks. That was probably the end of these jeans and the rise of realization that this kind of fad should be short-lived.

Technically speaking, everything lacy was in style in the 2000s – be it your fly area or the bottom of your jeans. The flares of the jeans were the most popular lacy area during those times. Even the shirts with lacy necklines were very popular. However, over time, it was proved as a fad.

5. No Back Pockets on Jeans With the constant need to reapply your frosted gloss, these no-back pocket jeans posed a tad bit of complication. However, this fad continued for a long time in the 2000s. The low-rise jeans with no back pockets were in. The famous girls in high school could be seen wearing the most wanted combo of lace-up jeans and back pockets. Let us just say if there were pockets on your jeans in the 2000s, they had to be bedazzled ones with diamantes and little sparkling jewels. Owning a pair of lace-up jeans and one with embellished pockets could easily make you the most famous girl on the block in the 2000s. Many girls had heart-shaped pockets with jewels hanging and even tassels. 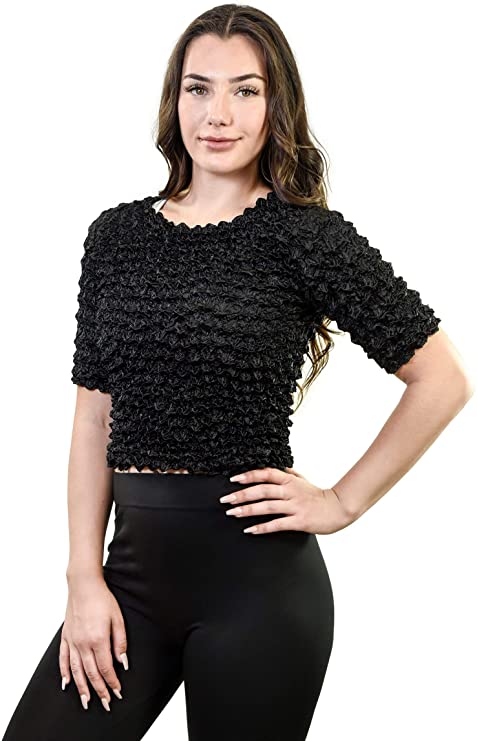 No, this does not refer to the picture of popcorns on the front of the t-shirts. The scrunchie shirts that looked like they could not fit anyone but a toddler were the most popular ones amongst the girls in the 2000s. Their ruffled material stretched to your size when you put them on. This innovation was the ultimate elegance in that era. One thing that gives away how you lived your teenage to the fullest in the 2000s is your love for tattoo choker necklaces. This was probably the piece of jewelry owned by every girl at that time. They came in various designs and mostly in black color. They were a beloved accessory of all the girls.

Many fashion fanatic girls used to think of this accessory as a necessary piece of their attire and considered their neck bare without it. However, these choker necklaces used to get stretched after wearing them for a long time but were easy and inexpensive. Therefore, everyone owned a handful of them. Many people are guilty of loving and religiously following this trend in the 2000s. A very long beaded necklace over a block-colored tee or a halter top with flared lacy low-rise jeans was the look many girls went after. Multiple beads were considered more fashionable. This fad went on for a long period, and girls went crazy in collecting these necklaces. When Britney Spears wears something, it surely becomes a fad. This is what happened in the 2000s. She brought denim to the spotlight, and poof! From hats to skirts and dresses to vets and jumpers – it was as if everything in our wardrobes turned to denim. Denim shirts and jackets with bedazzled pockets or corners were ones everybody died for. As if embellished pockets and lacy jeans were not enough, the 2000s era was crazy about big studded belts. These belts matched perfectly with your hoody or your tee. It was very versatile in being styled as you like without making you cringe at the studs – as it would if you wear it today! Butterfly hair clips completed the stylized look of every teenage girl who aspired to look a little trendy and feminine in the 2000s. They came in various designs and styles – such as glittery ones with studs or plain block-colored ones. Capris were the in thing in the 2000s. Your low-rise jeans with high bottoms were the best you could have styled yourself. Celebrities like Rihanna also followed this trend and were seen wearing low-rise capris with strappy shoes back then. Mostly, the kids rolled their pants to make capris, but you could stitch from the sides and look trendy.

Fashion is ever-evolving. There is nothing more stable in fashion than change itself. The fads are supposed to create hype, remain for some time depending on the liking, and then disappear. From low-rise jeans to denim shirts with lacy fronts, the 2000s was an era filled with numerous fads that are resurfacing these days and some that are dead forever. Hope you had nostalgia while reading this article, looking back and cherishing what the 2000s were all about.