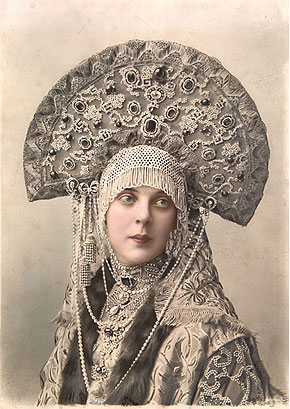 Headdresses are significant indicator of a historical fashion of a certain country. A headdress was an essential part of a Russian peasant’s outfit. When leaving their homes, all village community members were required to completely cover their heads (and, for women, their hair).

A bare head was an embarrassment (for women) and an insult to others (for men). The Russian language retains words and proverbs associated with that tradition.

The headpiece served as a sort of village passport. It reflected a wearer’s age group (specifically, their ability to have children), number of children, marital status, and so on.

According to ethnographers, all traditional cultures around the world used a headdress (or a hairdo) as a marker of physical maturity. And Russia was no different.

Russian peasant head covers expressed changes in the wearer’s family situation or health very carefully and precisely. As a result, people could change their hats yearly (or even more often, e.g., during adolescence).

Learn more about the various hats and headdresses worn in Russia below.

Men wore treukh (literally “three ears”) in the winter with three flaps to protect the ears and back of the head. This was similar to the ushanka winter fur cap with ear flaps, which only appeared in the twentieth century. During the summer, men wore a tafya, a small round cap similar to the traditional Central Asian tubeteika, or a skullcap.

Because married women were expected to cover their heads and hide their hair, headgear came in various styles. They wore a povoynik, a soft cloth cap, or a kerchief at home. When they went out, they wore a kokoshnik, a stiffened above-the-headdress.

Almost every territory had its own crest-shaped or cylindrical kokoshnik design. Beads could be attached to a headdress. Women wore fur hats topped by headscarves in the winter.

The Kokoshnik is a traditional headdress Russian girls and women wear to go with their sarafan. The kokoshnik tradition has persisted in the ancient Russian city of Veliky Novgorod since the 10th century. It spread primarily in northern Russia and was quite popular from the 16th to the 19th centuries.

It is still an essential feature of Russian folk culture and dance ensembles today and inspired the Kokoshnik architectural style.

A kokoshnik is historically a headdress married women wear, though maidens wore a povyazka, similar to a kokoshnik but open in the back. The term kokoshnik refers to a wide range of headdresses sported throughout Russia, including Kostroma’s triangular Kika, Veliky Novgorod’s cylindrical hats, Kargopol’s small pearl hats, Vladimir’s two-pointed nimbus Kika, and Moscow’s scarlet kokoshniks.

While kokoshnik styles varied greatly in the past, they are now generally associated with a tall, crest or nimbus-shaped headdress tied at the back of the head using long thick ribbons in a sizable bow. The crest can be embroidered with goldwork and pearls, or you can applique it with flower and plant motifs. The forehead is frequently embellished with pearl netting.

Russian women typically wear their hair in a plait while wearing a kokoshnik. The Kokoshnik was frequently combined with a Russian braid. The term kokoshnik first appears in documents from the 16th century and is derived from the Old Slavic kokosh, meaning “cockerel” or “hen.” However, the oldest headdress pieces of a similar type (a rigid cylindrical hat that completely covered the hair) were discovered in Veliky Novgorod burials from the 10th to 12th centuries.

The decorative corbel arch that became a distinguishing feature of traditional Russian architecture from the sixteenth century onwards was named after the Kokoshnik.

During the early 19th century revival of Russian national culture, diadem-shaped tiaras had become part of the official court dress for ladies-in-waiting and royalty. These “kokoshniks” were inspired by the French hood and Italian Renaissance fashions, and the authentic Russian kokoshniks were still sported by the time’s wealthy and middle-class peasants. During this time, both married and unmarried women wore the traditional unmarried hairstyle: showing the front side of the hair and a translucent veil descending the back.

Russian émigrés revolutionized the Kokoshnik in European fashion after the 1917 Revolution. The style was first seen in 1893 in the wedding headdress of Mary of Teck, the United Kingdom’s future Queen consort.

For her 1924 portrait by Philip de László, Queen Marie of Romania sported a Cartier tiara designed to resemble a Russian kokoshnik. The tiara was displayed as part of the Grand Palais in Paris’ “Cartier: Style and History” exhibition, which ran from December 4 to February 16, 2014.

Senator Padmé Amidala’s Gold Travel Costume in the Star Wars saga was derived from the Russian national costume with the Kokoshnik, which was known in the rest of Europe from photographs taken during the 1903 Winter Palace Ball.

At the 2018 FIFA World Cup, some Russian fans wore simple variants of kokoshniki. Kokoshniki made of flowers have grown popular in recent years. Kokoshniki is a well-known Russian souvenir. The ornaments that decorated the Kokoshnik were extremely valuable. In the center, there was usually a stylized “frog” – a fertility symbol. On the sides are S-shaped swan figures, which represent marital fidelity.

A stylized bush was customarily embroidered on the back of a Russian headdress to represent the tree of life, with every branch representing a new generation. And there were fruits with seeds, birds, and many other symbolic signs on this “bush.” As a result, the Kokoshnik also served as a talisman.

There was a unique type of Kokoshnik with pearl cones. These one-of-a-kind decorations represented fertility. There was even a saying, “How many cones – that many kids.”

Some Kokoshniks crafted for the royal family were extremely expensive because they were considered a great family value. People carefully preserved them and passed them down as heirlooms. Several generations of women frequently used them.

Karl Lagerfeld extensively rethought Kokoshniks for the runway. They made an appearance at Chanel’s “Paris-Moscou” show in 2009. Jennifer Lopez also posed in the traditional Russian headdress for the cover of Russian Harper’s Bazaar in 2014.

Many fashion brands now sell their versions of the Kokoshnik, both reinterpreted and classic, in the form of minimalistic, pretty headbands.