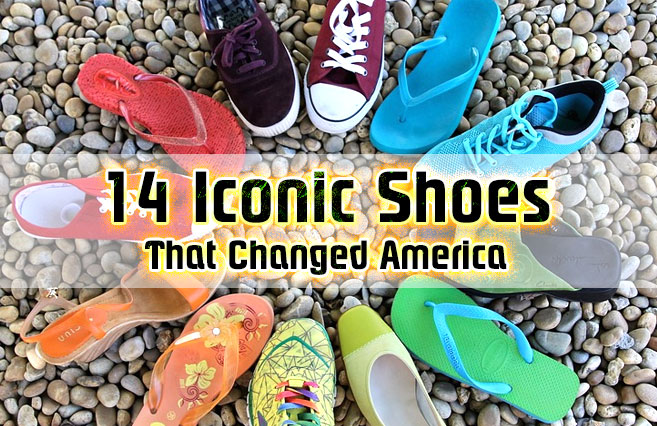 The TV series ‘Sex in the City’ may have brought attention to America’s fascination towards shoes, via Carrie Bradshaw’s indulgence for Manolo Blahniks in particular. However, the nation’s obsession with shoes dates way back. Here, we’ll travel through the footwear trends through the ages, paying special attention to those that have become an integral part of American culture.

Anyone who has seen the late screen legend Lana Turner’s film ‘Imitation of Life’ will likely remember her memorable entrance at the doorway. She was dressed from head to toe in white — midriff shirt, turban, and open-toed pumps. But it was the pumps that drew the most attention, mainly because they epitomized the sensual appeal of the 1940s slinky heels. Many more actresses during that time also preferred those sexy heels and even christened them with racy monikers.

If you want something similar to those iconic pumps, check out the shoes below:

These stiletto pumps have the classic peep-toed look for Lana Turner’s classic style. They won’t cost you an arm and a leg, but they’re not so inexpensive that you doubt their quality. Their straps are in a crisscross design, and you don’t’ have to settle for just the black color either. These are available in silver, hot pink, white, purple, rose red and yellow colors along with many other shades.

Loafers and ballet flats became part of a huge trend after Audrey Hepburn was seen wearing casual black suede slip-on loafers on her film Funny Face. The loafers, designed by Salvatore Ferragamo, soon became her signature shoe. This trend highlights the influence of beatnik styles on popular culture. For a similar style today, check out the choice below:

These loafer shoes are suitable for both men and women who need the utmost comfort for their everyday tasks. You can walk, drive, and stay stylish with the color ranges and quality provided in this shoe option. The rubber tread will keep a firm grip on those smooth office floor or the streets. AT the same time, the outer appearance is smooth and classic, making these shoes dressy enough for most events.

Audrey Hepburn’s slip-on loafers paved the way for the popularity of casual footwear such as sneakers. This type of footwear is popular among rock-and-roll types, the rebels, the nonconformists, surfers, and several other demographics.

By the spring of 1962, sales of the sneakers skyrocketed to about 150 million pairs compared to 35 million the year before. Casual sneaker brands such as Keds, Converse Chuck Taylor All-Stars, and Vans began to experience their own unprecedented commercial successes. You can mix up your styles with the Ked sneakers below:

There are rose and champagne shades for these glittery suede Keds, among a few other choices. With these sneakers, you can get comfort and practicality along with a bit of formal bling. They’ll hence be perfect for some casual evenings out where you still want to rock some style! The cushioned insole and breathable lining will make sure you feel comfy while looking your best.

After the Second World War, much of the world recovered economic prosperity. After experiencing sartorial austerity during the war, the term “glamour” crept its way back successfully, especially during the 1950s. Women were ready to act and dress femininely again after toiling in men’s jobs and labor during the war.

Stiletto heels (or simply stilettos) rose to become popular post-war footwear. This was not only because women were wearing feminine fashion again. It was also because steel, which was needed to reinforce the heels, became prolific once more after the nation experienced a shortage during the war. Now, in the 21st century, stilettos are still considered a favorite footwear for women, especially those who are quite fashion-conscious.

The 80s were the highlight of the athletic sneakers, thanks to the pure white Reebok Freestyle that became a huge hit during this decade. Part of the reason for this trend might have been the 1980 NYC transit workers’ strike. Because of demonstrations, workers were forced to commute by walking all the way to work for a whole 11 days. This called for some reliable footwear that would serve well for walking and be on the inexpensive side.

Actress and fitness guru Jane Fonda also contributed to the success of the sneakers. In her videos, she and her fellow exercisers wore Reebok sneakers, and many of her viewers followed suit. Following is a unique offering from Reebok that will still get you hat power and durability today:

This Reebok shoe is available in several color combinations, with primal red, solar yellow and, vital blue being just a few of the available options. Their new bootie-like construction makes for a soft, comfortable experience as well as a durable one. The toe area is specially reinforced for intense workouts. It’s been tested and designed for the maximum performance, so we can expect a versatile shoe at the end of the say.

The 1970s were known not only for the disco but also for its unique fashion. This particular decade produced one of the most outrageous footwear styles in history, the platform shoes. For the first time in the 20th century, both men and women seemed to wear a similar style of footwear. Platform shoes for men were popularized by John Travolta’s character Tony Manero in ‘Saturday Night Fever’.  Soon, fans of the movie and Travolta himself were experimenting with this style.

Anyone who grew up in the early 90s will surely remember themselves boasting a pair of Docs during their heyday. The company itself was established way back in 1960 by Dr. Klaus Märtens, who came up with these steel-toed boots. Märtens, who had also seen action during World War II, didn’t find success with his creations at first. That would change when he struck up a partnership with a Luxembourger named Dr. Funck and formed a business with him in 1947. The shoes finally became a big hit, though interesting to note that over 80% of the company’s sales in the first decade was mostly due to housewives over 40 years old.

Doc Martens rose to its peak of success when the grunge music scene exploded in the US during the early 1990s. The success of the genre ushered in the grunge fashion, where Doc Martens were part of the ensemble. When you wore a pair of Docs during those days, you were considered “in.”

Do you think that wedges are a recent fashion trend? That’s not the case; wedges were created in one of the most difficult times in the 20th century, the Second World War. At this time, the legendary Italian shoe designer Salvatore Ferragamo, who created footwear for Hollywood celebrities, experienced material shortages during the war. The steel that was used to reinforce high heels was in short supply due to the demands of wartime manufacturing.

Hence, he thought up a solution: instead of the slender heels, cork was used to occupy the place between the sole and the heel. The wedge part was due to the obvious weakness of the material in relation to steel. Ferragamo’s breakthrough invention became wildly popular in the United States, and now they’ve returned to make a huge splash in the fashion world all over again.

Spanish shoe designer Manolo Blahnik is renowned for his expensive, sexy, elegant, and high-end shoes that bear his name. His clients, obviously, were the rich, the famous, and the powerful career women who rose in the corporate ranks during the 1980s. However, it was not until the hit long-running series ‘Sex and the City’ that Manolo Blahnik became a household name. Since then, Manolo Blahnik’s shoe empire is now bigger than ever.

Apart from the Manolos, Choos and Louboutins were also often mentioned in the series Sex and the City. Jimmy Choo and Christian Louboutin are among the modern names in today’s shoe fashion. They’re also sought after by affluent, modern, and powerful women who splurge on fashion to their hearts’ content.

Jimmy Choo opened his first shop in London by renting an old hospital building. Soon, his handmade shoes landed on the pages of high-fashion magazines such as Vogue. Choo’s first big-name client was none other than Princess Diana, a connection that bolstered his image and business. From then on, his expensive creations have been worn by the rich and famous including Hollywood’s A-listers. Christian Louboutin’s red-soled shoes have become so prized (and copied) in the shoe fashion world. You may read a bit more about Louboutin in a separate list item here.

With their unusual, provocative and playful design, the Prada flame heels are not to be forgotten. The shoes are characterized by graphic cut-outs running along the outer heels of the shoes. You will feel like a superhero when wearing this incredible pair. Your feet may either look smoking hot or burning out when wearing these shoes, depending on how you carry them.

This shoe is the epitome of luxury meets street-wise fashion. Using his real skill, ingenuity, and creativity, British designer Nicholas Kirkwood used a humble can of spray paint to complete the shoes he’s become famous for. He sprayed a glinting electric blue onto the shoe’s suede body. His shoes became a hit and are particularly loved by actress Sarah Jessica Parker.

On the other hand, red-soled shoes are French designer Christian Louboutin’s trademark. There are a few stories t on how he came up with the idea of red soles. The most well-known story says that Louboutin saw one of his assistants painting her nails red and thought that the color would look gorgeous on the soles of his shoes. Now, his shiny, red-lacquered shoes have graced the red carpets o the feet of wealthy and famous clients all over the world.

If you’re looking for more information on iconic shoes, the book below may be of help:

This book is a 2017 release, so it’s a recent source of several shoes that have shaped the world. The shoe designs portrayed here range from the highly fashionable to some very practical choices. These include Zaha Hadid’s Melissa shoes in 2008 as well as the Frye boots from 1863.

You may not be able to find the perfect pair of shoes for a shoe enthusiast, but this book will be sure to delight them it’s an excellent choice for the coffee table and is a unique conversation starter. It’s also a worthy investment for shoe designers, as it can offer inspiration and ideas.