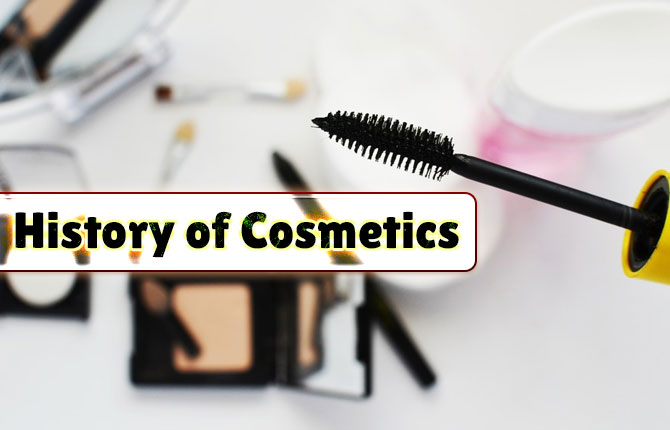 Cosmetics or makeup are almost as old as civilization itself. It’s a natural human instinct to want to look your best, and cosmetics are the tools with which one can achieve such goals.

However, cosmetics have gone through several phases in history, from being coveted items to being considered immoral and frivolous. Check out the history and the evolution of cosmetics below: We might regard makeup as a modern trend, but that’s simply not true. Archaeologists have extracted jars of unguent and other cosmetics from the ancient Egyptian tombs. Unguent is a soft greasy substance extensively used by men and women during that time to keep their skin soft and supple as well as prevent it from wrinkling under the searing sun.

From research and similar archaeological findings, we know that the ancient Egyptians also used other lotions, balms or skin creams which were made from various ingredients. These included castor oil, beeswax, rosewater, and olive oil. Ancient Egyptian women also darkened their eyelids and eyelashes with kohl, which was made from soot or any other burnt element. People in ancient China started to paint their fingernails with a nail polish consisting of gum Arabic, beeswax, egg, and gelatin. The nail colors symbolized social class — members of the royal family wore gold or silver while ensuing royal members wore either red or black. People in the lower classes were not allowed to wear bright nail colors. During the Greco-Roman era, people used to put lead or chalk on their faces in order to get that desirable whiter complexion. They also combined ochre with red iron to make a lipstick, which stood out from their white faces. Cosmetics in the Middle Ages and the Renaissance

White, pale skin represented wealth and superiority during this time, and therefore became a trend among the European aristocracy. During the Middle Ages and the Renaissance era, lead paint or powder was used to whiten the face. Although lead made their faces look fairer, it was poisonous and thus posed a high health risk. Many people got seriously ill due to this trend.

An infamous lady named Signora Toffana created a face powder from a combination of lead, arsenic and possibly belladonna or deadly nightshade. Signora Toffana taught her wealthy clients to apply the face powder only in the presence of their husbands. It’s interesting to note that Signora Toffana was executed after her poisonous concoction led to the deaths of over 600 husbands. Cosmetics During the Elizabethan Era

Women during this period used to slather their face with lots of egg whites for a glazed, glistening look. Imagine how that smelled, and be grateful we have highlighters now. Cosmetics During the Victorian Era

Cosmetics were looked down upon during the Victorian era, as wearing them was associated with prostitutes or actresses (both of them were viewed as one and the same). Anyone who wore bright make-up was sneered at or condemned.

We can experience this particular attitude towards cosmetics in several classic literary works. Louisa May Alcott and L. M. Montgomery, for instance, both wrote novels in which good girls simply didn’t use any kind of cosmetics. In the novel ‘Gone With the Wind’, the main character Scarlett draws scandalous attention when she applied rouge to her cheeks. Cosmetics During the Early 20th Century

When the use of cosmetics was brought back at the starts of the 20th century, it was still viewed as immoral. However, the use of natural tones soon became acceptable. The general attitude toward makeup gradually became less suspicious, with people finding encouragement to try out bolder shades.

This era was the dawn of safer cosmetics. It began when zinc oxide was introduced as a safer substitute for lead. This natural ingredient is still commonly used in today’s cosmetics. Around 1910, women made their own crude version of mascara by using hot drops of black wax and applying them on their eyelashes.

In 1914, Tom Lyle Williams introduced the world’s first modern mascara, which he named Mabel after his older sister. The mascara’s brand was called Maybelline, which is now a relatively inexpensive brand that we’re all familiar with today. Helen Rubenstein, Elizabeth Arden, and Max Factor began their respective cosmetics businesses by opening their own salons during the early 20th century. These cosmetic pioneers were inspired by the looks of the theater actresses and ballet dancers during that time. Other ‘Firsts’ in Modern Makeup

The 1920s was a wonderfully innovative time when it came to makeup. This was the era when makeup as we know it came into being.

The pressed powders, pressed blush-ons, liquid nail polish, powder compacts, lipstick metal cases, and other cosmetics were introduced during this decade. The convenience and result of these offerings mean that they soon became wildly popular. From Audrey Hepburn’s cat eyes and thick eyebrows to Kylie Jenner’s line of lipsticks, celebrities have proved to be effective models for the latest makeup trends. Today’s makeup trends tend to go back to the natural look with some styles from the past. Many celebrities have their own unique style, which their arduous fans may copy. According to several sources in the know, the most popular cosmetic and skin care brands currently include Estee Lauder, Dove, Neutrogena, Lancome, Maybelline, Clinique, MAC, Avon, Olay, and L’Oreal. Some celebrities have also come out with their own makeup lines, such as Rihanna and Kylie Jenner.

The popularity of any brand might also be because of its cruelty-free guarantee.

Catching Up On More Details

If the discussion above has sparked your interest in cosmetics and their history, getting a book on the subject might be your next step. We recommend the title “Classic Beauty: The History of Makeup” by Gabriela Hernandez and similar works. Check it out here: This work contains more than 450 images, several timelines, and all sorts of details about the innovators and icons of fashion till date. It’ll make a great coffee table book for a modern fashionista.

In this day and age, it’s very common for any man or woman to have some variety of cosmetics on their dressing table. Some women might deem it necessary to put on at least a bit of makeup before venturing out of the house, while men might want to moisturize before starting the day.

Since cosmetics are such an inoperable part of their lives, it’s worth finding out more about their past. If nothing else, we should be grateful for the innovations that have made makeup more convenient and less harmful.